GHCCM Stories of Hope and Healing

HomeGHCCM Stories of Hope and Healing

Stacy Gibson, GHCCM Housing Coordinator, was contacted by Casey McCall, Hickory Police Department Community Navigator, to notify her that a 22-year-old male, Jose, was living in his car at the Patrick Beaver Library. As a result of Mr. McCall’s referral to GHCCM, Jose visited GHCCM the following day for an assessment and some brainstorming on how to meet his needs.
Jose’s backstory explains how he became homeless. Jose grew up in an abusive home and stopped his education during his senior year of high school. He did not have a job to pay for rent. Jose had a history of being bullied and struggled with life because no matter where he went, he was being verbally or physically assaulted. Life became unbearable at home.

Jose did the only thing he could think of; he got in his car and left his home in Georgia and headed north. He ran out of money when he arrived in Hickory. He used his last tank of gas to stay warm at night and when the gas ran out, he also ran the battery down during a cold night two weeks ago. That’s the point when HPD discovered him and called Casey. Casey gave Jose a jumpstart, a gas card, and the GHCCM contact information along with a referral for a job with the City of Hickory.

Jose applied online for all four available positions with the city, interviewed for two of them and then stopped in GHCCM. We were able to talk with the city’s HR department and found out that they were going to make Jose an official job offer the next day. Stacy called one of the landlords who houses other GHCCM neighbors and asked if there could be a place for Jose based on his expected income with the promise that GHCCM would pay his deposit and remainder of February rent. The landlord agreed and allowed him to move in the next day.

Stacy recently spoke with Jose on the phone. He is enjoying his new home and new job and tickled that with his pay of $17 per hour and benefits that he will be able to improve his life. Jose is perfect example of when we work together, a life can be brighter.

58-year-old male, Type 2 Diabetic, working towards getting his diabetes under control, has been a neighbor at CCM for year. He completed the diabetic cooking classes with a certificate. He is successfully controlling/lowering his AIC.

On 11/21 he was terrified when he had Triple Bypass surgery. The medical clinic care team provided emotional support through his surgery by communicating with him while he was in the hospital and supporting him when released. He is continuing his care and counseling through the medical clinic. He lives with the aging mother on a monthly SS income $1336. One day when he picked up his prescriptions, he said, “ I don’t know where I would be without CCM; you saved my life.“

Each day Peer Support Specialists provide hope to our neighbors:

Mentally challenged, 44-year-old male, raised by his grandmother from age 5, has been coming to CCM/WLC for diabetic care because of his uncontrolled diabetes.

His Grandmother died in late 2021 which caused a tremendous amount of frustration and fear. As a result of her death, he was in the care of an uncle who was antagonistic and threating. GHCCM Peer Support Specialist counseled with other family members who are very willing to help. As discussions progressed, the tension in the home began to ease. One-on-one counseling with Dr. Gray (LR volunteer), and Elizabeth Gentile, PA were scheduled. As a result, he was provided emotional support every step of the way. Life for this gentleman is much more stable.

58-year-old male who is homeless but occasionally “stays with his sister” is a patient of the GHCCM medical Clinic. He has a myriad of diagnoses from Hep. C, multiple substance use (alcohol to cocaine), Schizoaffective Disorder (Bipolar type), uncontrolled Insulin Dependent type 2 Diabetes, and Seizure Disorder.

When he arrived at a Medical Clinic for one of his appointments, he handed the Peer Support Specialist a handful of disability paperwork, saying “I’m having trouble understanding all the words”. As staff worked with him to complete the documents, he stated, “I just don’t remember”. With help and guidance from trained staff, eventually the forms were completed.

On a return visit, he brings in another SS envelope, with a due date two weeks past due. After numerous calls to DSS, having the neighbor to sign representative paperwork, and the DSS representative going up the ladder of command, his case is reopening in appeal for a hearing for him to receive Medicaid. His comment follows: “I do not know what I would do without the loving help from CCM”.

CCM’s Impact on Our neighbor, Cindy

We met Cindy at the Salvation Army Shelter last February.  Her husband had been incarcerated and she had never worked or done the finances so it did not take long for her to lose everything.  We talked many times about employment opportunities, job skills, training and education.  She was overwhelmed by the idea that she needed to work to pay for an apartment.  Eventually Cindy found a small part time job that allowed her to work ten hours per week. At first, it exhausted her and took a toll on her physical health.  Eventually she was able to build up her stamina and increase her hours.  She is now working 40 hours a week between two jobs.  CCM helped her find housing in a boarding house. In September, Cindy purchased a car.  We educated her on banking and insurance practices and she has been able to switch from a second-rate bank to a first-rate bank and made a similar change to her car insurance.  These changes have saved Cindy some funds each month.  She had been able to pay her bills, but her bills did not line up with her paychecks.  We were able to pay her rent one more time and she is now able to pay each bill on time and no longer has to pay late fees.  Cindy is currently working on trying out budget apps to find the best one to fit her needs because the paper version we have been doing is not to her liking.  Her short-term goal is to have a savings account with one month’s equivalent of her bills available.  Her long-term goal is to save money to have her own home once her husband is able to join her.

OUR OWN SUCCESS STORY 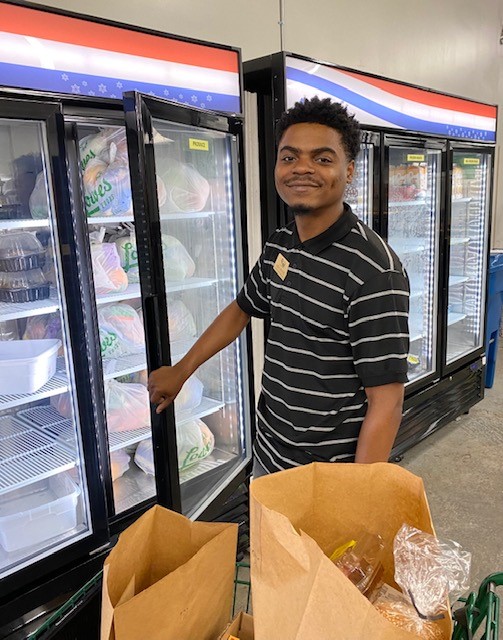 When Jailen Howell entered the doors of GHCCM at the age of 17, he never thought that within 2 years he would hold a management position. Jailen’s story is one of dedication, setting his sights to believe ‘the sky’s the limit,’ and learning from those around him.

In early 2020, Jailen was taking a class at HCAM (Hickory Career & Arts Magnet High School). His assignment was to volunteer to obtain class credit. Jailen picked GHCCM. When COVID hit, the class was suspended. Rather than giving up, Jailen went to NC Works, where he was given a paid internship and was assigned at GHCCM in the Nutrition Center. During his internship, he worked within all areas of the Nutrition Center from sweeping floors to food distribution and inventory…doing whatever he could to help. He observed those around him, studied procedures, and accepted every task. He felt that the more varied jobs he did, the more he would learn. The philosophy of hard work and determination paid off in a full time position as the Nutrition Center Coordinator.

Jailen has accepted the responsibility at GHCCM just as he did in his personal life. He is a single dad raising his 3 year old daughter. He wants to teach her the importance of family, hard work, and that the ‘sky’s the limit’ for her, as well. Jailen and his daughter definitely have a bright future. We are proud of Jailen and know he will continue to grow professionally.

A Typical Day at GHCCM…

Success is our daily work:

Mr. Martinez came to GHCCM for assistance with his rent. He had been sent by one of the local churches. His wife has cancer and is taking chemo treatments. Her physician advised Mr. M. to take off from his job to take care of her. He works in construction and has used his savings trying to help with his wife’s medical needs. Now, he is trying to determine what to do next to pay his bills. He has depleted his money on her medications.

GHCCM will be making a pledge for their rent in November. As the Neighbor Engagement team member explored the upcoming bill for Mr. M. and his family, GHCCM determined that we can assist with his power bill as well.

In addition, GHCCM secured a walker and wheelchair for his wife. Upon further discussion, it was determined that the wife qualifies for a GHCCM Medical Card, and an appointment has been scheduled with the physician in the Medical Clinic. This will also allow her to receive some of the medications through GHCCM instead of having to pay the high costs at a retail pharmacy.

After hearing the story and meeting the family, the GHCCM Medical Clinic staff has decided to adopt this family for Christmas. They are going to provide Christmas presents for the family because this may be the last Christmas for them all together due to his wife’s health condition.

This story is one of many examples of how GHCCM provides a ‘wholistic’ (whole person) approach for all neighbors. God teaches us to ‘love our neighbors.’ GHCCM is an example of God’s love in action!

Serving Catawba County by providing and coordinating services for the uninsured, individuals and families facing crisis, living in poverty and/or experiencing homelessness. 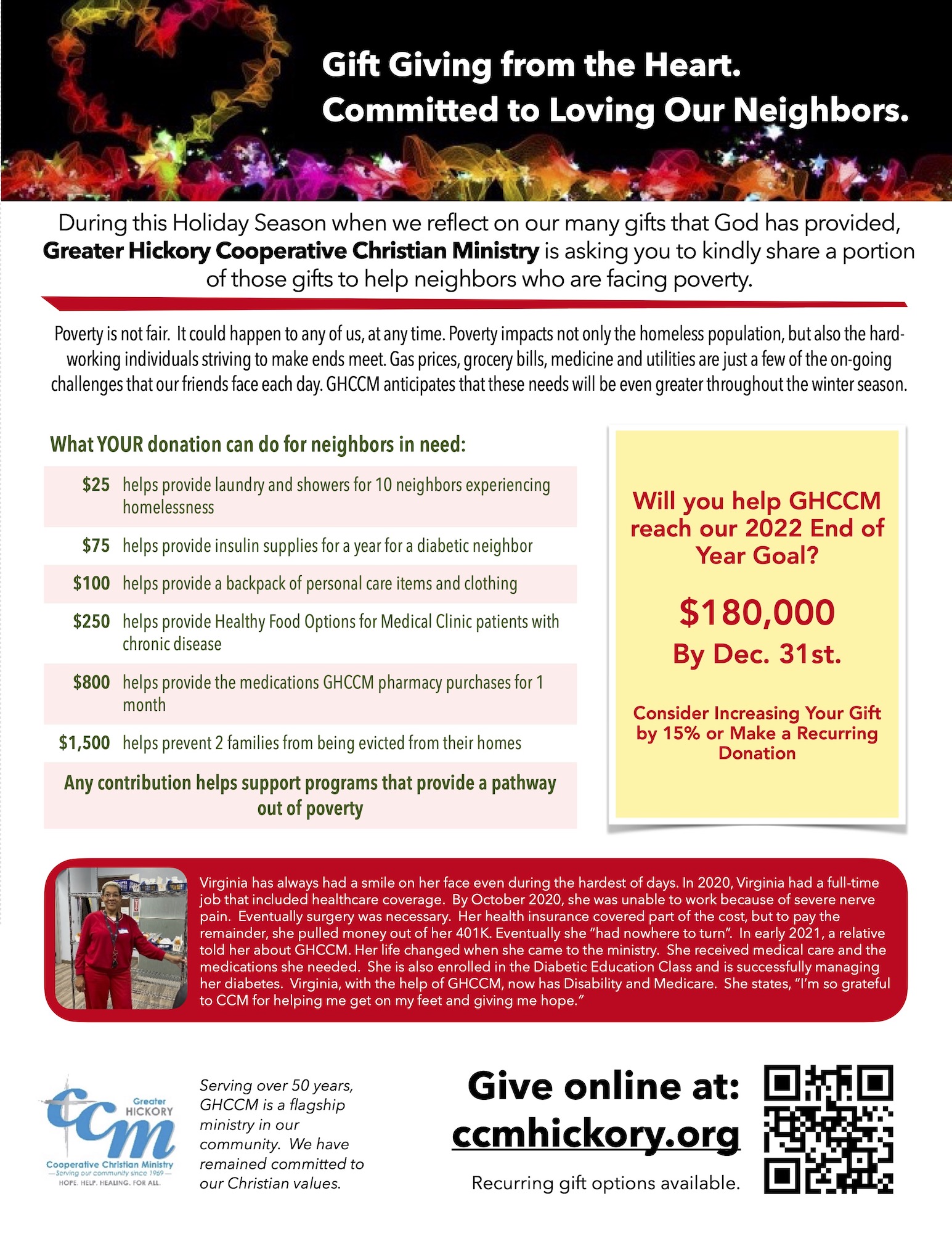 Click to Donate!
Consider Increasing Your Gift by 15% or Make a Recurring Donation
Click to learn more about GHCCM 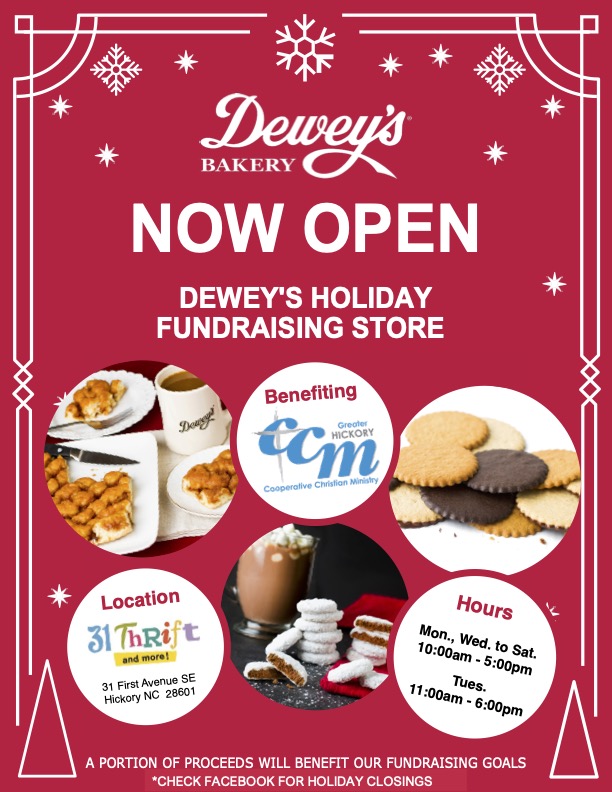 Click the player below to download an mp3 copy of the 31 Thrift and More segments on First Talk with Hal Row on Thursday, November 17th from 8:00-8:30am: 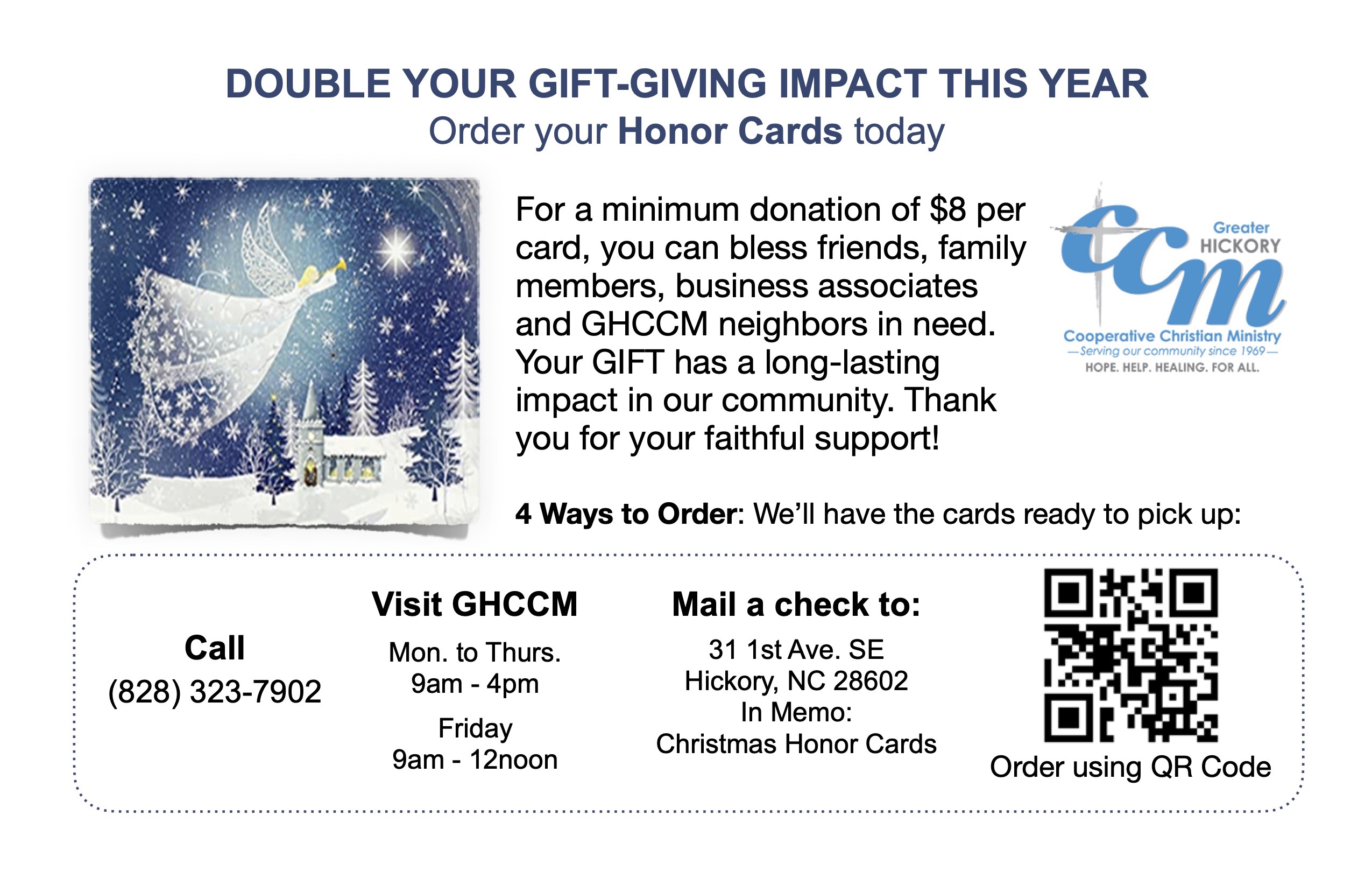 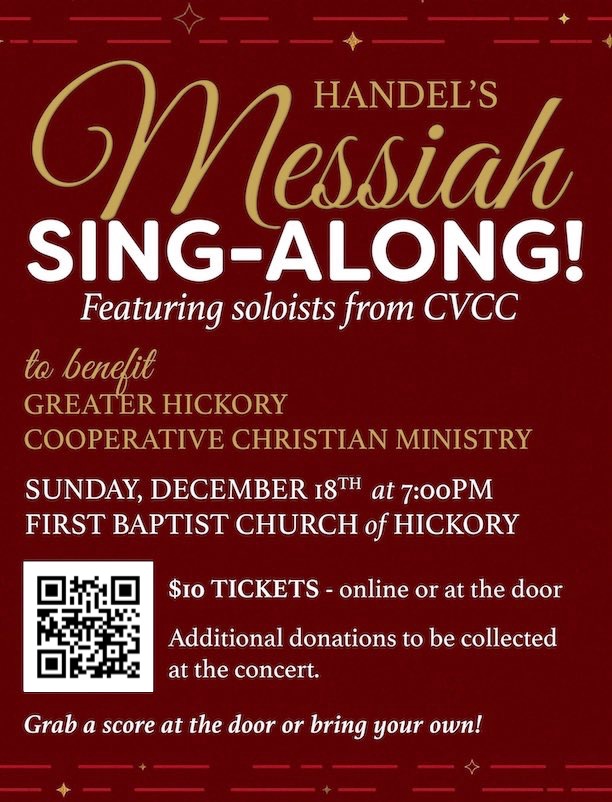